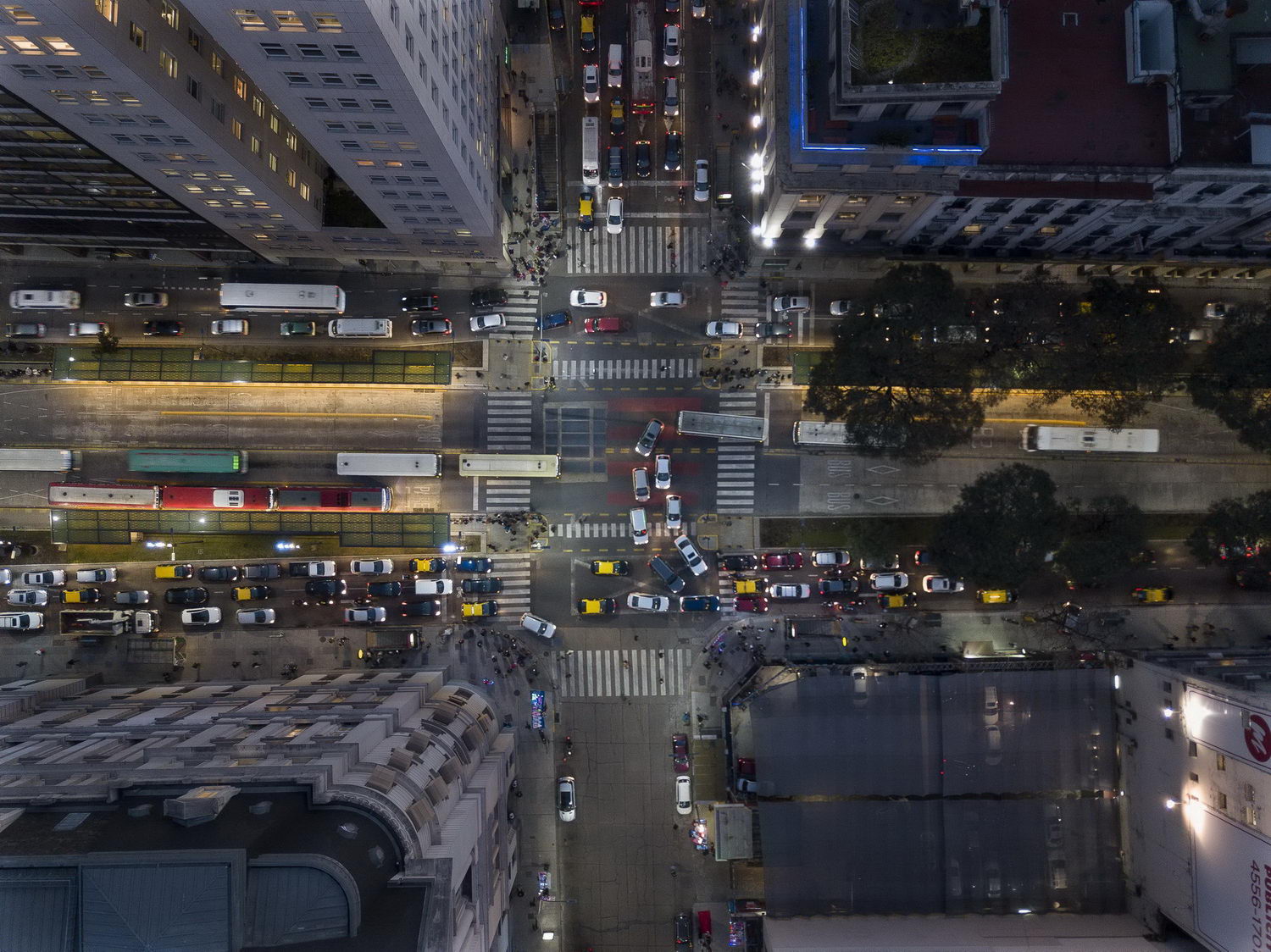 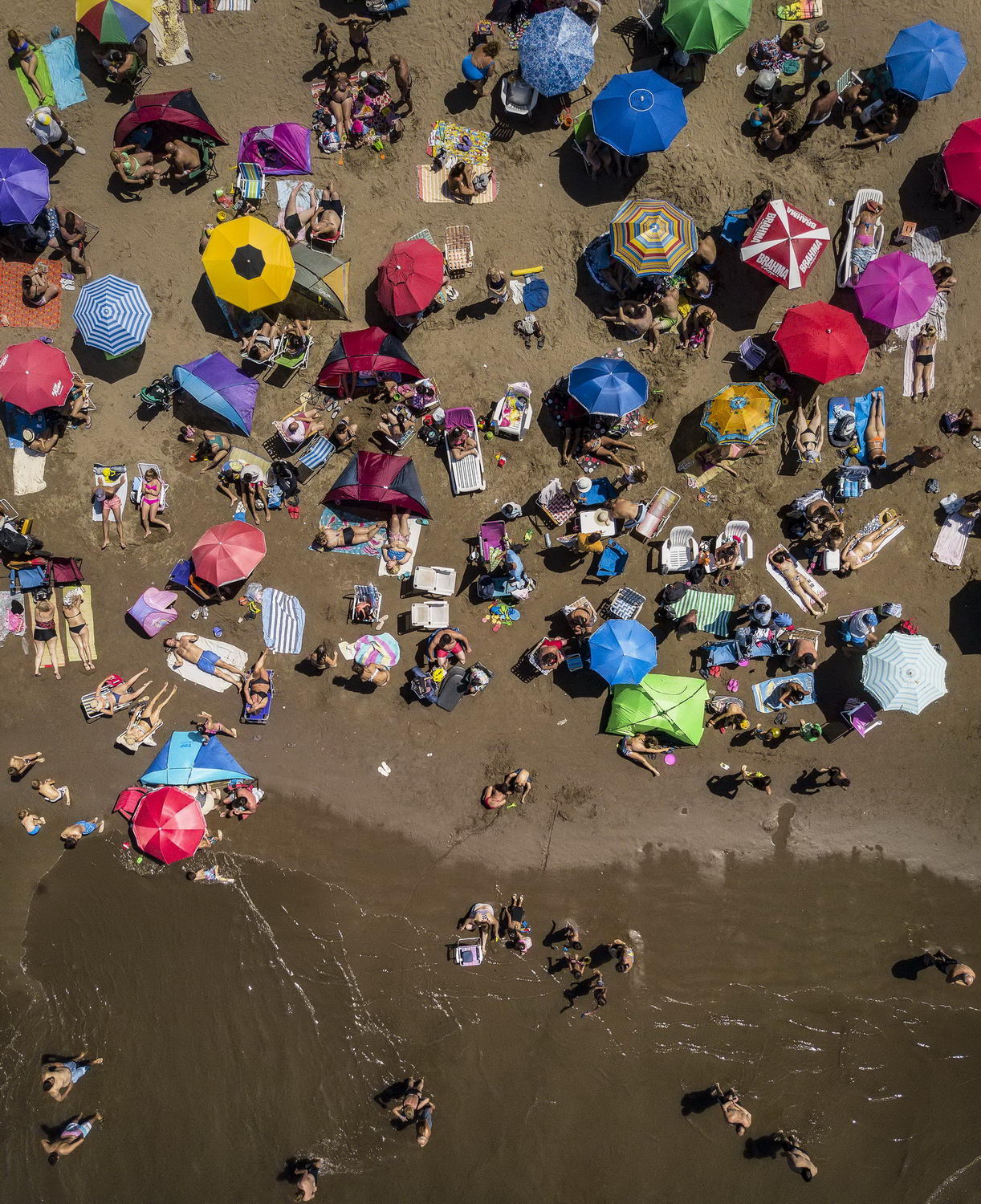 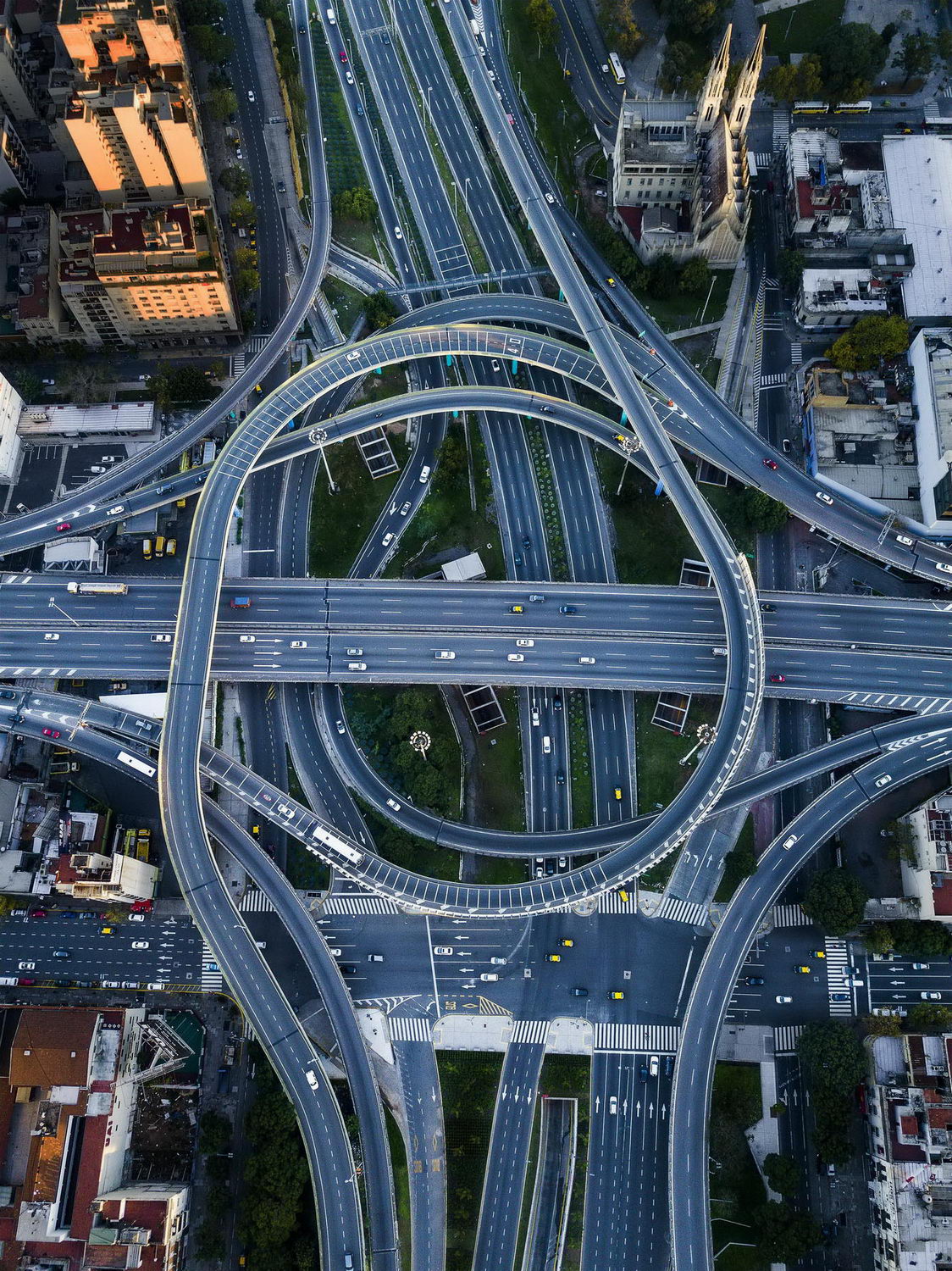 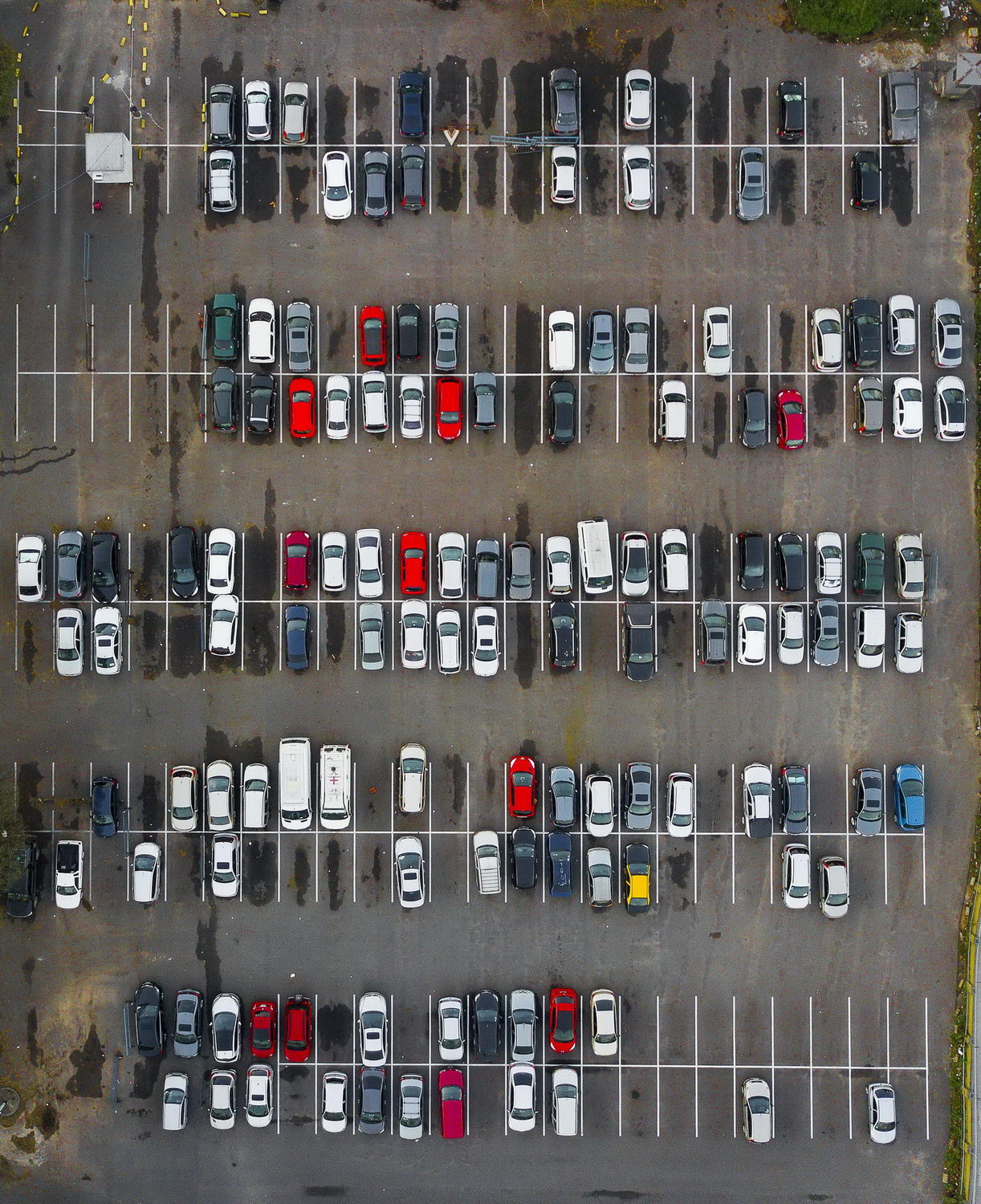 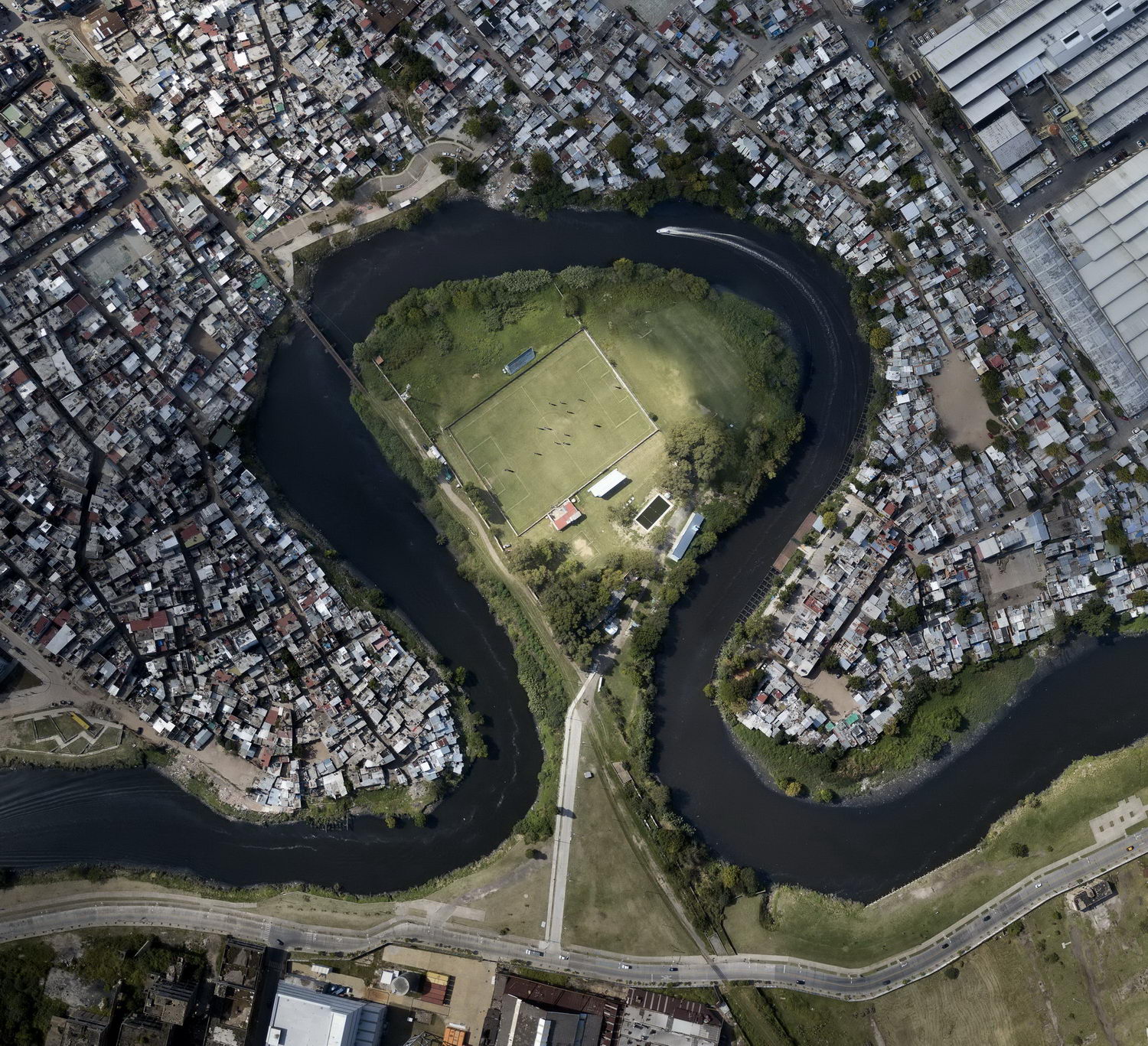 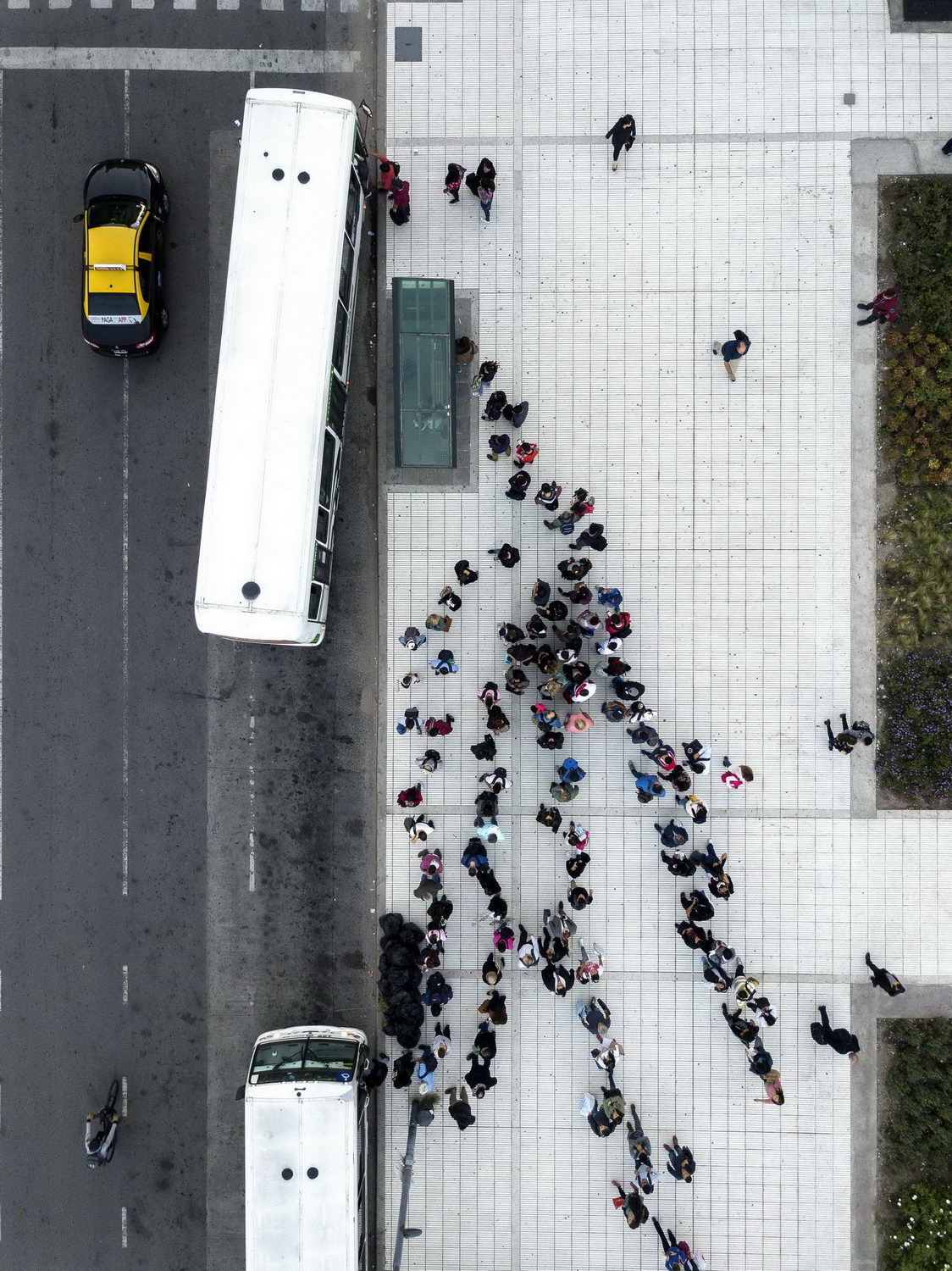 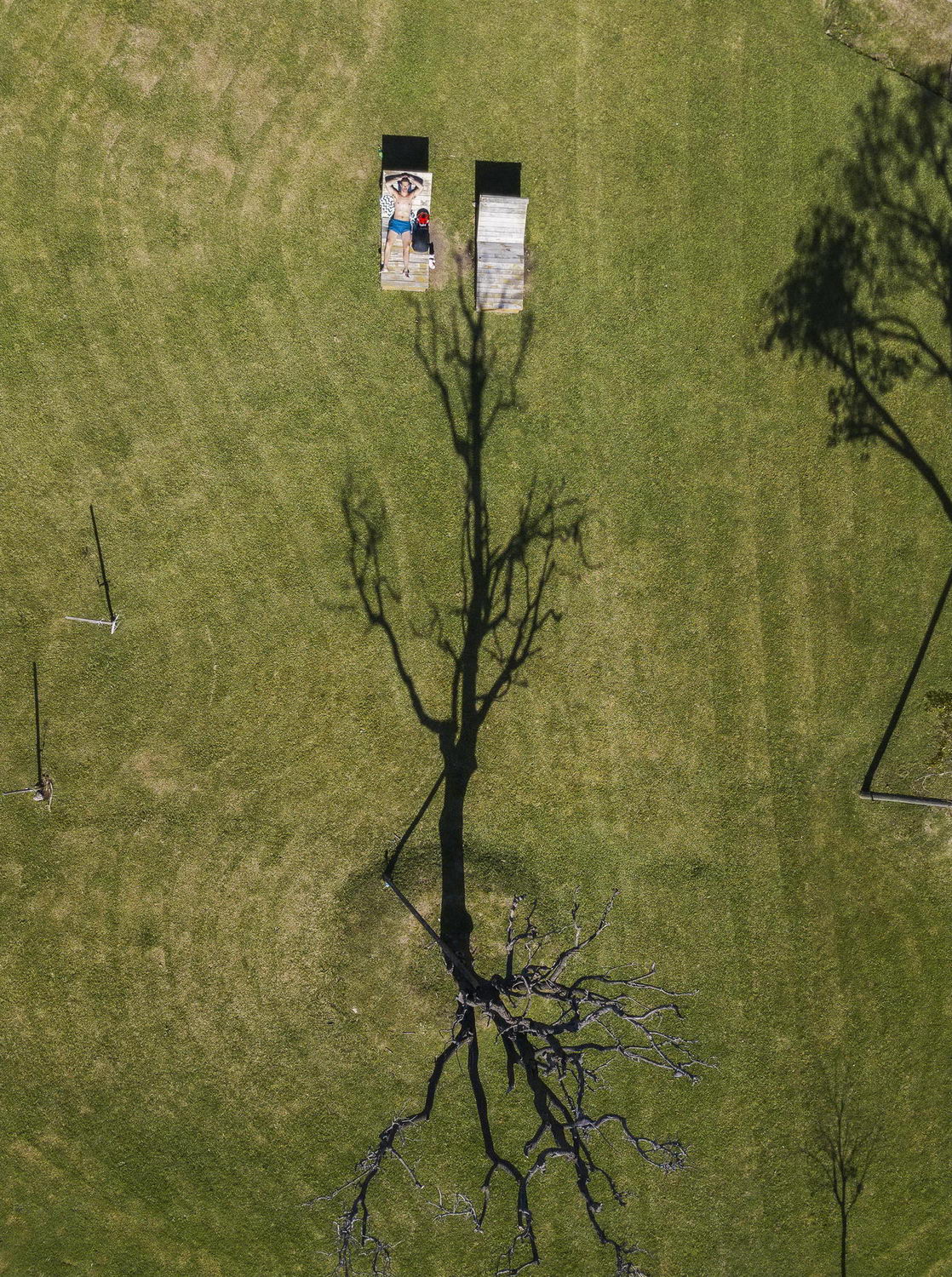 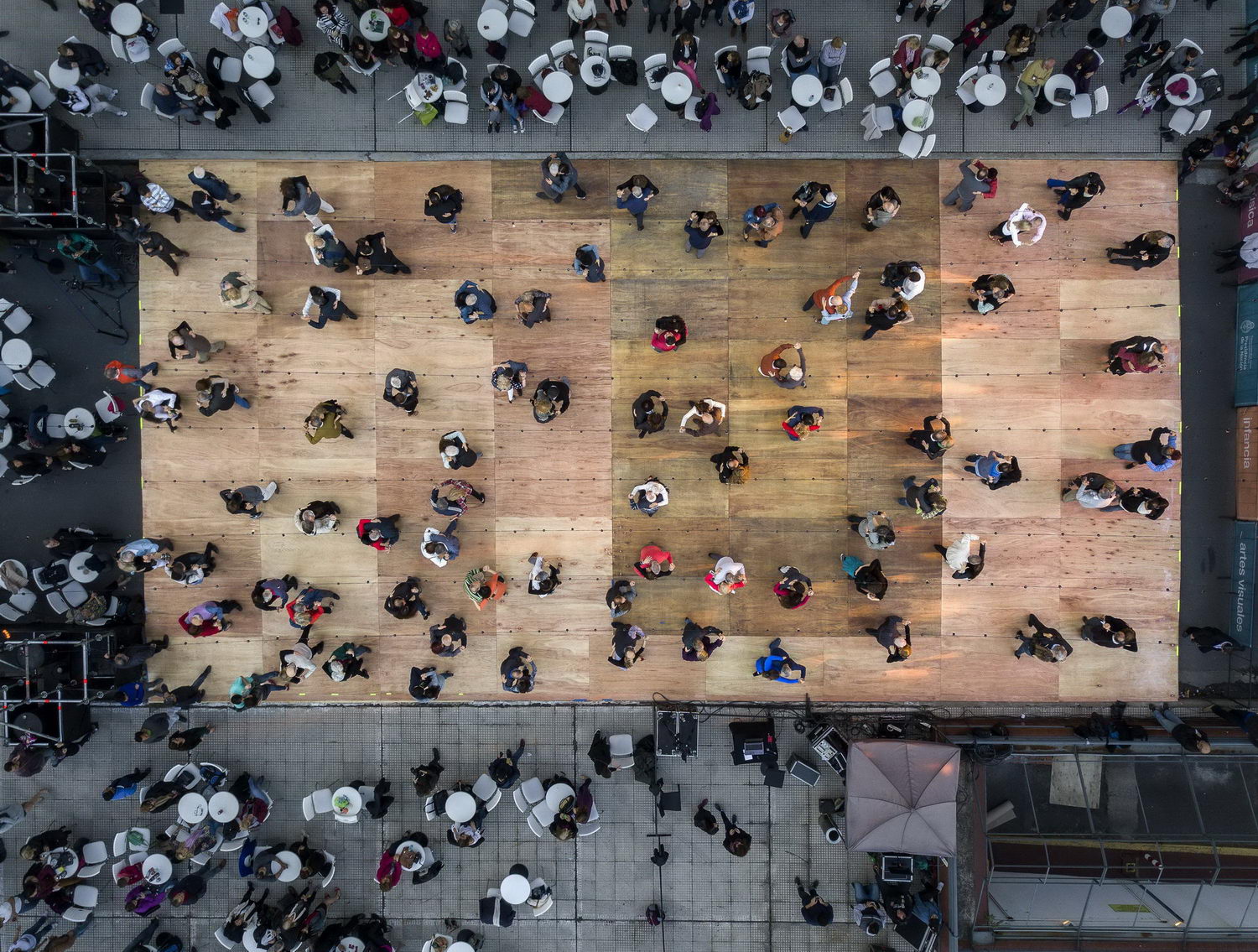 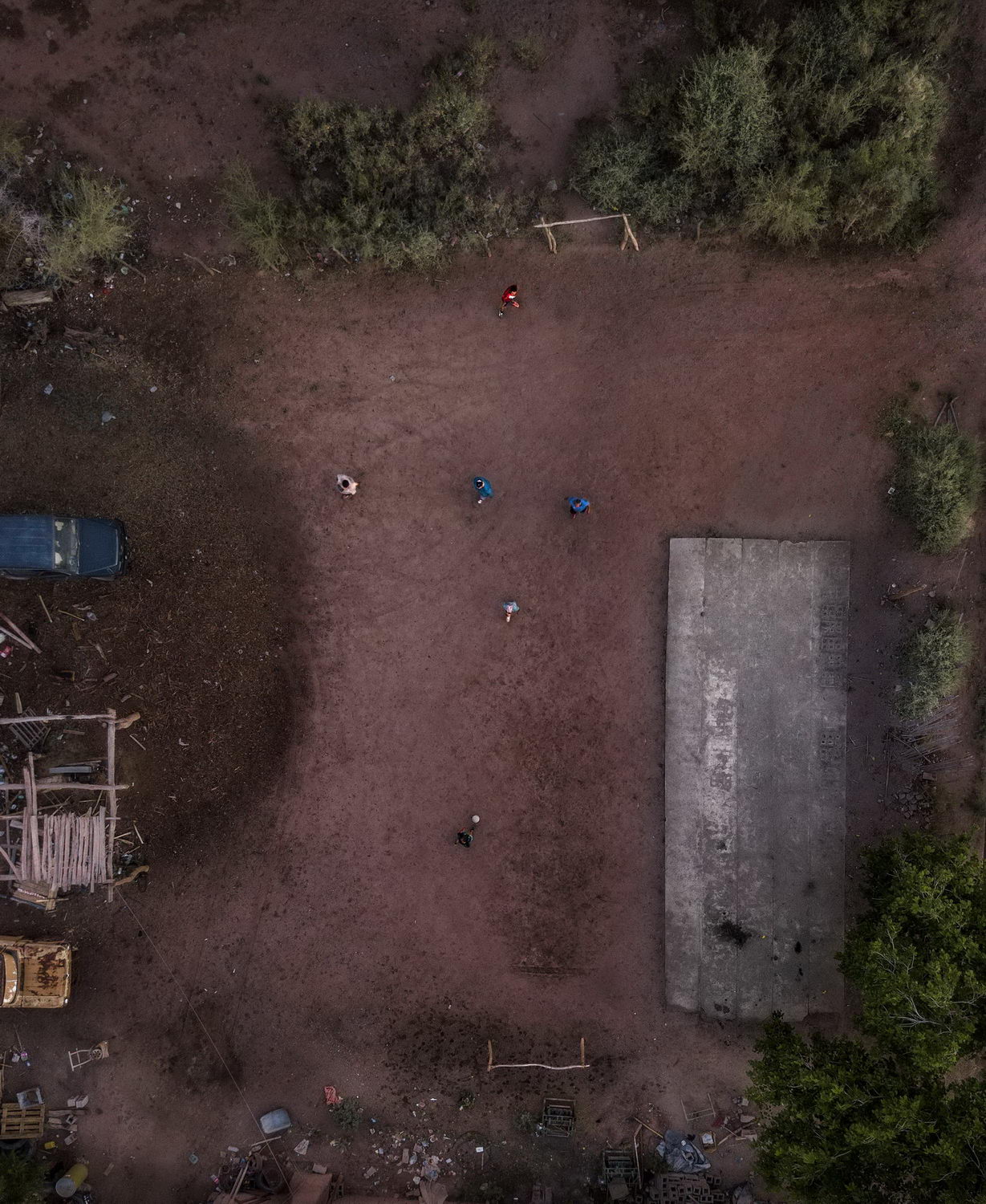 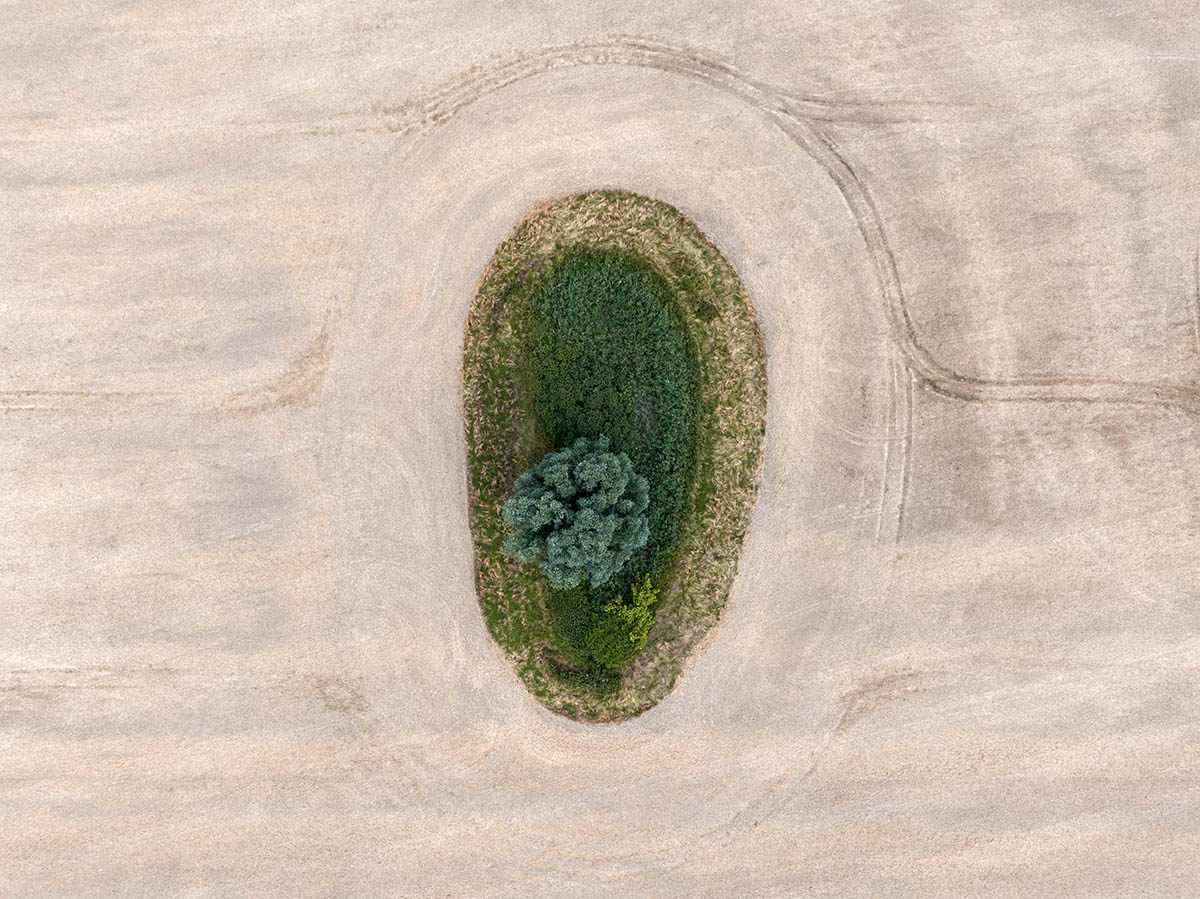 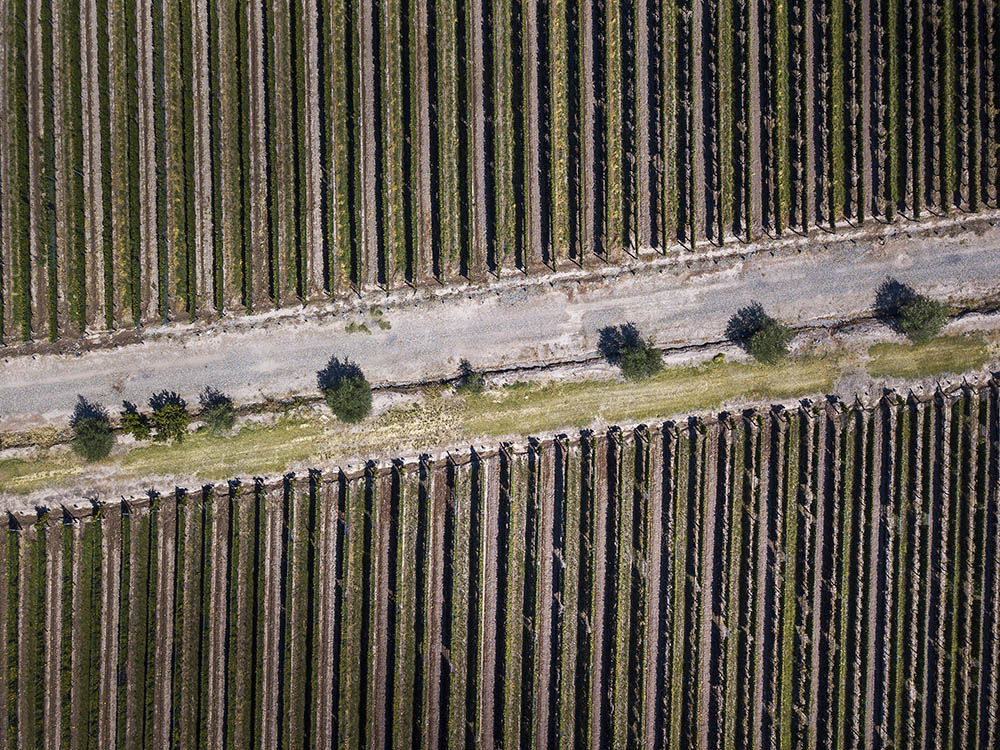 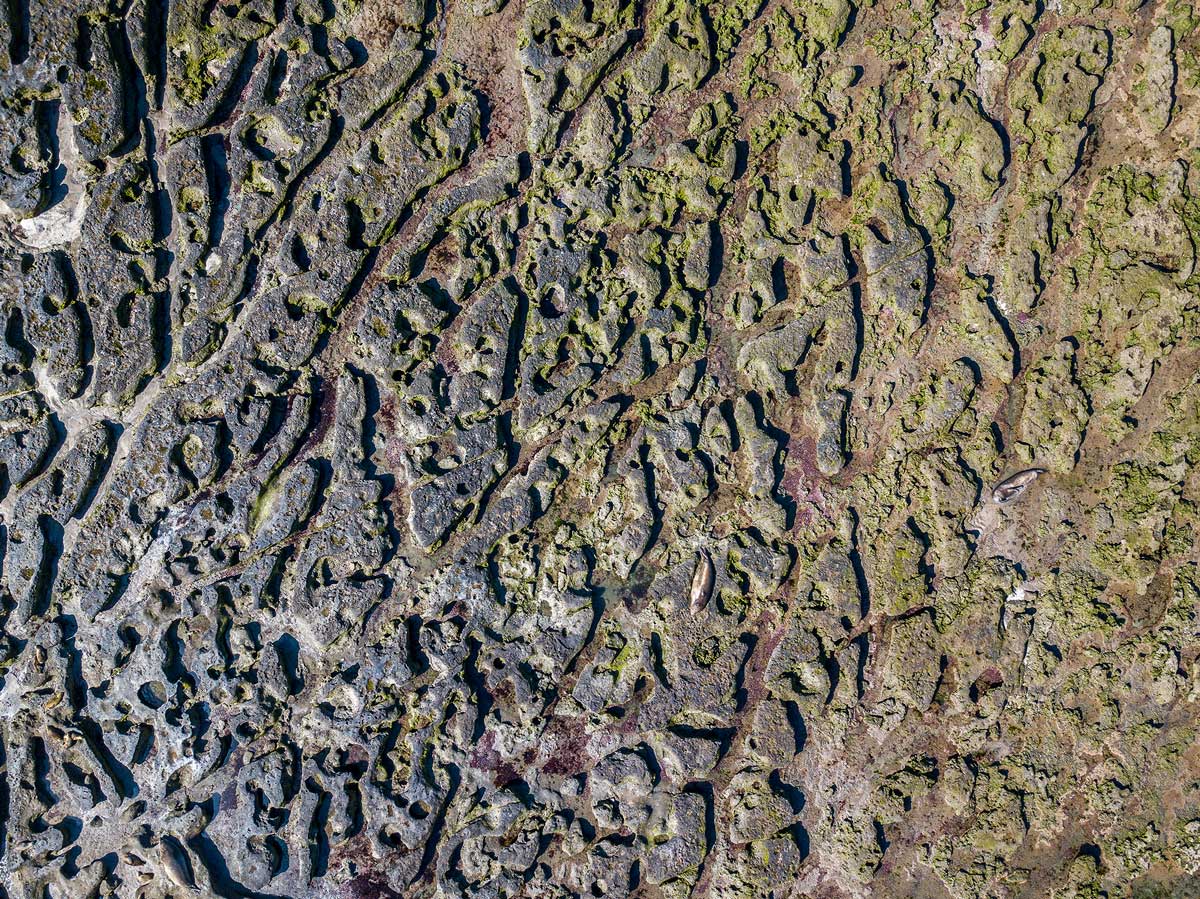 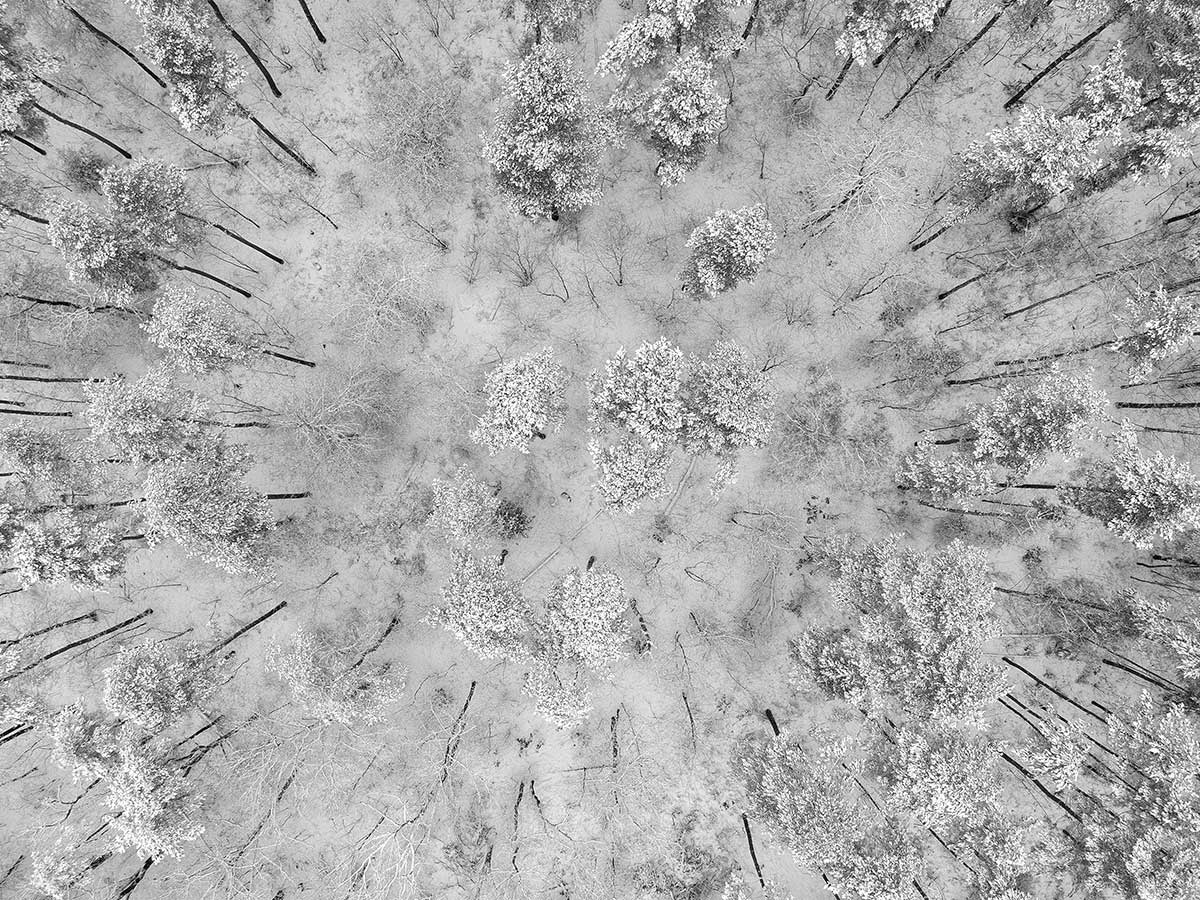 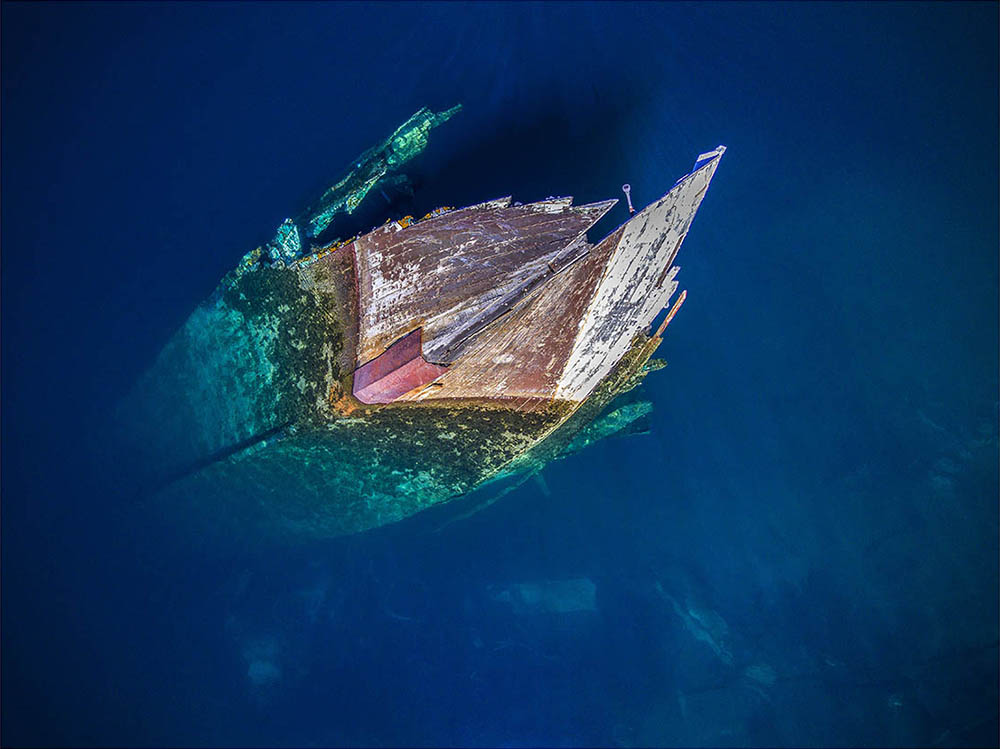 1) Intersection during the rush hour:

Buenos Aires has a surface area of 203 km² and a population density of approximately 15,000 inhabitants per km². More than 3.5 million people enter the city daily from the outskirts, adding to the more than 3 million people who already live in the city.

For those who go to work in the morning, returning home during the rush hour can take hours.
The aerial view over one of the intersections of Corrientes Avenue (which is 8.6 km long) and Alem Avenue, takes us away for a moment from the noise, the clutter and the overcrowding. Only from above can we find the beauty within the chaos.

The construction of these concrete masses began in the 1980’s during Argentina’s last military dictatorship. Successive governments carried out expansions over the decades, which often implied excessive budgets and unclear concessions with the construction companies.
The latest extensions of the 25 de Mayo Highway, located to the south of the city, have caused several accidents after its reopening. From its “rings”, several trucks have overturned their load from the height, which ended up forcing the placement of a containment mesh to avoid future accidents.

The latest extensions of the 25 de Mayo Highway, located to the south of the city, have caused several accidents after its reopening. From its “rings”, several trucks have overturned their load from the height, which ended up forcing the placement of a containment mesh to avoid future accidents.

Buenos Aires: 3.2 million people and 1.3 million vehicles. That means 6,629 vehicles per square kilometer. Can you imagine how hard it is to find parking there? Anyway, this parking lot near the presidential house no longer exists. It was removed when a major promenade was built on the banks of the Río de la Plata.

Will nature listen to our prayers? In the middle of the field lies this small island, surrounded by nothing but barren land. Tractor tracks are silent evidence of the passage of the human beings who work there, and who respectfully surround, without penetrating it, this furious, solitary and resilient greenery. Maybe this is where the earth rebels. Perhaps it is here that it sustains its cry.

Argentina is the fifth largest wine producer in the world. With 463,334 hectares of vineyards, the Cuyo region accounts for 95% of the total area planted in the country, making it the most prolific region in South America and one of the most important worldwide. Global warming is no exception in this area. Half a century ago, any fertile, well-irrigated land with sufficient sunshine was more than enough to plant a vineyard. Today, due to water scarcity and milder winters, winemakers are forced to look for cooler regions and resort to increasingly sophisticated irrigation systems.

Most of the people in Buenos Aires have to commute in crowded public transport with an inaccurate frequency in order to go back home. A sort of pilgrimage to which it is inevitably necessary to get used to in order to survive.

Available for your art collection.

Some of these images are for sale in my online shop. You can access from the button below.

Tip of the Iceberg

The visible part of an iceberg is enormous, incredibly beautiful, and powerful. Yet, approximately ninety percent of it is hidden below the waterline. In December, the month of our first anniversary, with a selection of artists from our community, we will celebrate everything we have achieved so far, the visible part, but we will also celebrate all that is still unseen, what remains to be discovered. We celebrate the future.

ALTERFOCUS, is a platform that aims to link the Latin American community living in Berlin through art & culture. We will celebrate one year since our inauguration.

In our anniversary month, we will celebrate our birthday with the event “Tip Of The Iceberg” on December 4th from 5 p.m. at GlogauAir. It will consist of an exhibition of more than 8 artists from our Alterfocus community 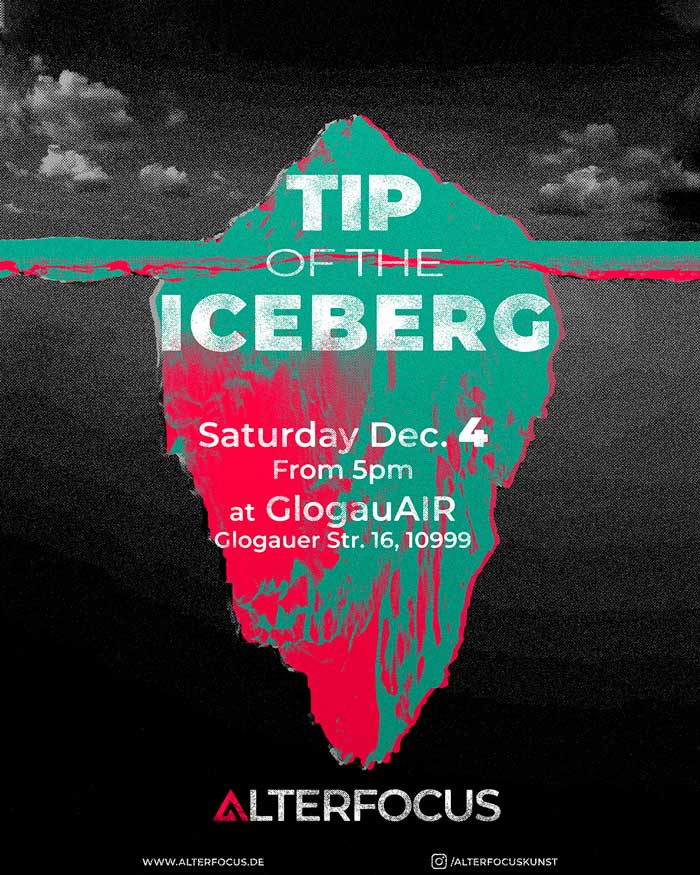 There are many places in Buenos Aires where professional dancers, apprentices and curious people meet to dance Tango. These places are known as “Milonga”.

There are traditional Milongas, where only those who dance very well, and do not want to share the dance floor with any beginner, usually gather.

But there are also less hidden spaces, more open to all those who are taking their first steps in this sensual and intimate dance.
Those who are not dancing wait at the side of the dance floor. They study movements, and wait anxiously to be invited by another to dance the next piece.

There is no previous choreography. Everything is subtlety and spontaneous creation. An embrace of great intimacy between two strangers.

During the hot summers in Buenos Aires, the lunch break can also be used to achieve a perfect tan.

In Argentina, soccer is the most popular sport. Without sufficient economic means to build a professional soccer field, this space is improvised wherever and however. A desolate spot in a small village in La Rioja can suddenly become the birthplace of the next Maradona. Who knows?

Peninsula Valdes is a natural reserve in Patagonia, on the Argentinean coast, and the breeding place for elephant seals. At the end of August, the males compete with each other for a section of the beach, waiting for the females that arrive a few weeks later. During the reproductive period, both males and females do not feed, losing approximately 15 kg per day.
The pups that are born stay with their parents for about 6 weeks before they develop the necessary skills to dive in the sea.

Their bodies settle into the rocky interstices of the coast, becoming one with their natural habitat.

During the snow season in 2021, I headed up to Teufeslberg, the highest part of Berlin city. I had to be very precise in the choice of the places to photograph. Neither I nor my drone would tolerate the cold for long.

And there was the forest, giving me a sort of explosion from the sky. The snow generates a special silence that absorbs all the sounds that are usually generated in the forest. And that silence can also be seen.

On the banks of the river “Riachuelo”, on a strange peninsula formed by the district of Avellaneda, where the suburbs penetrate the capital for only a few square meters, lies the Club Victoriano Arenas. It is the home of one of the first women’s soccer teams that fought for the establishment of professional women’s soccer.

Just on the other side of the riachuelo that surrounds the peninsula is Villa 21-24, one of the most vulnerable neighborhoods in the Autonomous City of Buenos Aires. On one side the search for equality, on the other the crude demonstration of a society that leaves those on the edge of a polluted river, expelled by the system.

I searched for this image for almost a year until I managed to arrange a visit to the club.
This photograph received the 3rd Itaú Visual Arts Acquisition Award 2019-2020.

14) A sunken ship at Huemul Island:

From 1948 to 1952 took place in this inhospitable island of the Argentine Patagonia, the development of a titanic scientific project that consisted of achieving controlled nuclear fusion. The so-called “Huemul Project” was in charge of the Austrian scientist Ronald Richter, during the first presidency of Juan Domingo Perón.

During all the time it took to build the laboratories and buildings for the project, ships came and went across the immense and deep Nahuel Huapi Lake, transporting materials and equipment for what would eventually be a failed enterprise, without any scientific support, and of enormous economic magnitude.

The story of the delirious Huemul Project, was later the subject of an opera, a book, and several articles and letters in scientific journals.

Anyone wishing to visit Huemul Island today must do so by their own means, with a boat that can be moored at its small pier, currently guarded by the Argentine Naval Prefecture.

The tour of this piece of Patagonian land, gives us an idea of the madness that the Huemul Project was for its time, and gives us the true dimension of nature making its way through the ruins left of its construction.

The three-meter wide walls belonging to the laboratories can still be distinguished among trees and lush bushes, as well as the hull of this old ship, sunk on one of the shores of the island, surrounded by a lake as blue as silent.

Available for your art collection.

Some of these images are for sale in my online shop. You can access from the button below.

Shop
Manage consent to cookies
This website uses cookies that are necessary for the technical operation of the website and are always set. Other cookies, which are intended to increase comfort when using this website, serve direct advertising or facilitate interaction with other websites and social networks, are only set with your consent.
Manage options Manage services Manage vendors Read more about these purposes
View preferences
{title} {title} {title}